VPHAS+ is able to take advantage of the high-quality active optics of the VLT Survey Telescope (VST), which, along with the good atmospheric conditions at Paranal, allow images to be obtained which routinely benefit from sub-arcsecond seeing. This page offers a few examples of the imaging data.

The OmegaCAM instrument covers a 1 degree x 1 degree area of the sky with 16k x 16k pixels. The colour images below show examples obtained from a single 4100 x 2048 pixels chip, corresponding to 15 x 7.5 arcmin. Click on the images to view them at the native resolution of 0.21 arcsec/pixel (albeit JPG-compressed). The red, green, and blue colours correspond to the (u+g, g+r, i+Halpha) intensities.

A crowded field towards Baade's Window

The image below shows CCD #18 in VPHAS field 0778a, positioned at (l, b) = (2.4, -3.1) deg in the constellation of Sagittarius. The field is located towards one of the brightest patches of the Milky Way, called Baade's Window, which is thought to show very low levels of extinction. Despite being relatively unobscured, a small cloud of interstellar dust can be seen to hide some stars in the centre of the image. The data were taken on 2012-07-06 (H-alpha, r, i) and 2013-06-03 (u, g, r), under ~0.8 arcsec seeing.

The image below is taken from the same field as above, but this time CCD #27 is shown. The open cluster NGC 6520 can be seen towards the bottom-right of the image. The blue colour of the cluster members indicates that these stars are bright in the survey's u- and g-bands.

The Wolf-Rayet star WR 31a

The image below shows CCD #4 of VPHAS field 1789a, which is located in the outskirts of the Carina Nebula. A known Wolf-Rayet star, WR 31a, is apparent on the left. A red (Halpha-emitting) nebula is seen to surround the object.

Details in the Carina Nebula

The image below shows CCD #2 of VPHAS field 1788a. Located 45 arcmin South of eta-Carinae, the image shows both beautiful details in the Carina Nebula 6000 light years away, and the mix of near and far stars (ranging from blue for the foreground stars to golden for the dust-obscured stars lying beyond the nebula, up to 20000 light years away).

The images below are constructed from overlapping survey exposures, mapping data from three distinct bands (e.g. Hα, i and g) onto the red/green/blue colours used.

The image below shows a VPHAS-based mosaic of the star-forming region Messier 8 (M8, or the Lagoon Nebula), which was prepared by ESO as part of a press release. The area shown is roughly 1 square degree, which is around 5 times the sky area occupied by the Moon. 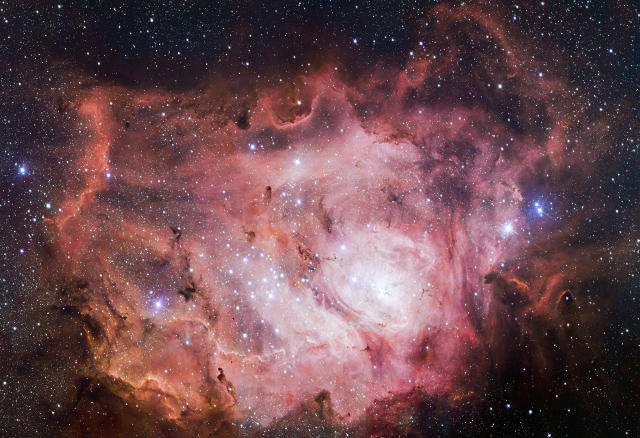 The press release was accompanied by two ESO-produced animations - one which takes the viewer from a wide view of the Milky Way to the mosaic, and another that tours the complex structure within M8 revealed by the VPHAS+ imagery.

The image below shows a smaller-area VPHAS-based mosaic picking out the massive star cluster Westerlund 1. The VPHAS+ data, here, have unveiled an ionized nebula around a red supergiant (see Wright et al. 2014). This finding was the subject of a press release issued by the RAS. 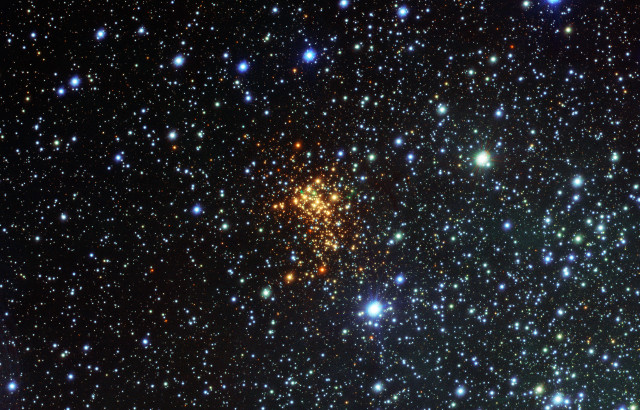 The image below shows an u/g/Hα mosaicked image of NGC 3293 (open cluster, middle top) and NGC 3324 (HII region, centre left) in Carina, created using data obtained in 2012, during the first season of survey data taking. The area of sky shown is a little over one square degree. 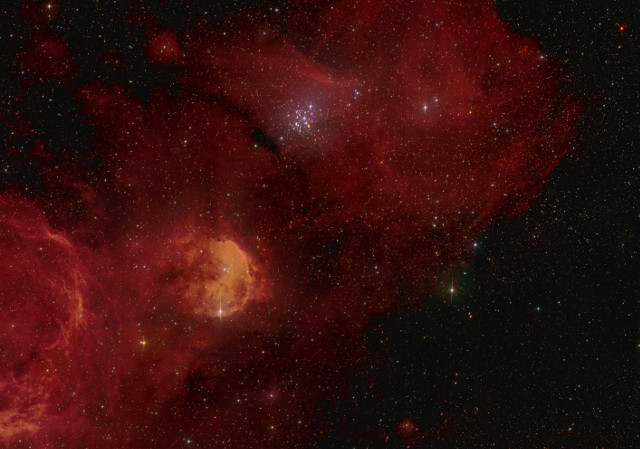