The image below shows the VPHAS+ survey footprint plotted on the sky. The originally-planned footprint is shown in grey, while green picks out the fields for which all data have been obtained. From mid-August 2018, after 7 seasons of effort, observing has been concluded at a completion fraction of 91.6 percent. 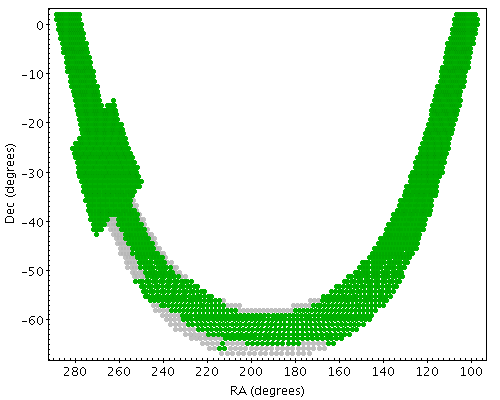 Survey footprint
The main survey strip is 10 degrees wide and is defined in Galactic coordinates as all latitudes within 5 degrees of the Galactic Equator (GE). There are two Bulge extensions that expand this latitude range to 10 degrees away from the GE. It takes a tiling of 2269 OmegaCam fields to cover the ˜2000 sq.deg footprint

Proposed data acquisition strategy
The original plan was to observe every field contemporaneously in the Sloan u, g, r and i broadbands, and also in Hα narrowband (using the segmented filter constructed for this survey, named NB_659) - and to repeat these exposures in a suitably chosen offset position.

Actual pattern
For VST operational reasons the consortium was asked by ESO to split the data-taking, executing the blue/red filters in darker/brighter time. To meet this request, we submit separated u/g/r and Ha/r/i observing blocks to the queue, including r band exposures in both sets so that the two filter sets may be tied together post-observing (as needed).

Survey depth and seeing targets
The aim is 5σ in all filters down to at least ˜20th magnitude (Vega system). The high quality of the Paranal site is typically betters this, particularly in g and r: in g the median achieved depth per pointing is fainter than 22nd. Typical survey seeing is close to 1 arcsec, improving to ˜0.8-0.9 arcsec in selected dense fields, such as in the less extinguished parts of the Galactic Bulge. 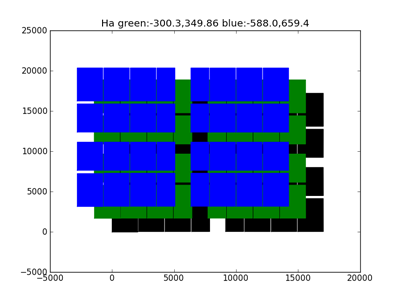 Offsetting strategy
Refer to the figure above. For the u, r and i exposures the outermost placements (black, blue) of the OmegaCam footprint will be used. For NB_659 exposures, the effects of vignetting due to the segment separators have to be countered by taking data in a third intermediate offset position (shown in green). The g band data also rests on 3 offset positions, aiming for fuller coverage and greater depth.

Properties of the NB_659 filter
This segmented filter was purchased by members of the VPHAS+ consortium. It was received and tested in Munich in 2009, and checked again before delivery to Paranal in 2011 (the combined test reports are here). Its stability in operation on the VST was monitored to late 2012 and is summarised here.